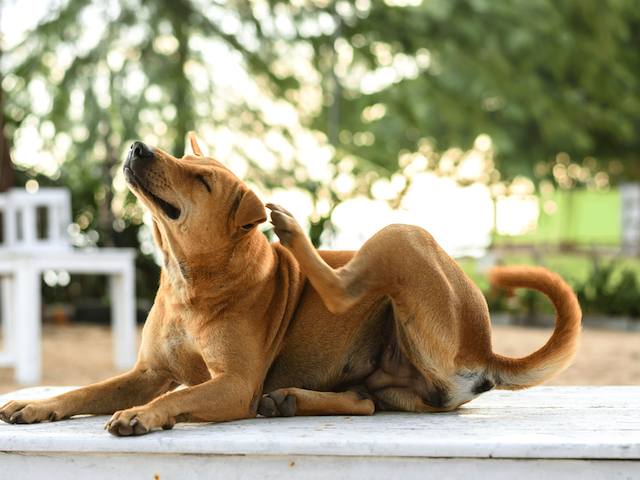 What do we know about atopic dermatitis in cats and dogs?

Atopic dermatitis (AD) is a common pruritic (itchy) skin disease characterized by disturbances in epidermal (skin) barrier function that can become chronic. According to researchers at the Ludwig Maximilian University and Dr. Jangi Bajwa, a published expert on feline atopic dermatitis, the prevalence of atopic dermatitis in cats and dogs has increased steadily in the last decade, with a reported frequency of 10-15% in dogs and around 12.5% in cats. Atopic dermatitis is considered a hypersensitivity disorder in pets because it is associated with an exaggerated production of immunoglobulin E (IgE) in response to environmental allergens.

While all breeds of dogs can get atopic dermatitis, Bulldogs, Golden Retrievers, Labrador Retrievers, German Shepherds, Boston Terriers, and Boxers are more genetically predisposed to the disease than others.

Depending on the offending antigens, some cases of AD can be seasonal while others are year-round. Atopic dermatitis can manifest as these clinical signs in both cats and dogs:

Researchers from the College of Veterinary Medicine at North Carolina State University provide helpful pictures and diagrams of typical atopic dermatitis in their 2010 publication.

Despite the prevalence of AD, it’s pathogenesis is still not fully understood. It is difficult to treat in part because AD is a relapsing, chronic cutaneous disorder and there are many ways the skin can respond to allergens. Severe cases of the disease can impact the quality of life of patients. Understandably, AD is a frustrating journey for pet parents, as finding effective treatments is an iterative and dynamic process.

The connection between AD and the gut microbiome is now being considered as a potential tool to treat the disease. After all, AD is an allergic skin disease caused by a dysfunctional immune system, and 70-80% of immune cells reside in the gut.

This article serves as a resource for both veterinarians and pet parents alike; it covers treatment options for atopy and what roles the sometimes overlooked microbiome can play in the disease.

Treatment for Atopy: “You can’t just do one”

It’s important to remember that a treatment strategy should be individualized to each pet. Current treatment options involve a combination of managing clinical signs, inflammation, and environmental allergens.

And she’s right - AD treatment is an iterative process that needs to be modified for the dynamic disease. The severity of symptoms can change seasonally and over time, secondary symptoms can arise, and side effects of some medication can begin to outweigh the benefits of its prolonged use.

Before starting treatment, it is important to minimize allergen exposure. Allergy testing can identify common culprits that cause allergic dermatitis, but it is also important to discuss flea control, mitigation of house dust mites, and other potential triggers with the pet owner. Special dietary formulations are also important to consider, such as to rule out food allergies or supplement the diet with essential fatty acids (fatty acids are immunomodulators associated with improved AD symptoms).

Before any AD treatment can be successful, you have to get Malassezia (a genus of yeast within the fungus kingdom) under control if there is an excess of it. Malassezia normally lives on the skin of cats and dogs in small abundances, but it can thrive on diseased skin and overgrow in some cases of AD. A Malassezia infection is a self-perpetuating cycle: Malassezia overgrowth triggers an inflammatory response, which then causes the atopic patient to develop IgE hypersensitivity to Malassezia, which in turn increases/sustains the symptoms of atopy, and so on. Luckily, it is a pretty simple process to detect the overgrowth of Malassezia, which may cause cats or dogs to have a very distinct odor, which has been described as smelling like rancid fat to bread yeast.

Strips of clear acetate tape can be stuck on the affected areas of the pet to collect seborrhoeic (oily) material as Malassezia is often found on flaking dead skin cells. The tape can be lightly adhered to a glass slide: after adding a few drops of basophilic stain to the slide, the tape is securely smoothed onto the surface of the slide, removing excess stain into a blotting tissue. The presence of Malassezia can be seen under the microscope with an oil immersion 1000x objective, such as the images provided here.

If localized evidence of Malassezia is found, it can be treated topically. Systemic treatments (e.g. itraconazole) are available for severe or ‘unbathable’ infections. A common starting point for Malassezia treatment is to bathe dogs with chlorhexidine shampoo. A low PH environment combats Malassezia, so cleaning affected areas between shampoos with MalAcetic wet wipes also helps manage the infection.

Glucocorticoid therapy is a common go-to used to control skin inflammation. This is a preferred topical treatment for acute and localized skin lesions over antihistamines, but the side effects of long term use of immunotherapy drugs can be problematic. Glucocorticoid therapy tends to be used more frequently in cats than in dogs, however it remains a viable option for canine patients. Similarly, corticosteroids such as prednisolone can also serve an anti-inflammatory purpose.

Targeting the itch reflex, Oclacitinib (Brand name: Apoquel) is a kinase inhibitor that is gaining traction as one of the newest antipruritic treatments for AD because it has proven effective in both cats and dogs. Oclacitinib is prefered over cyclosporine (Brand name: Atopica), an immunosuppressant drug, because it has a more rapid effect and causes less gastrointestinal side effects.

Too good to be true? Yes, for the long term. Long term use of Oclacitinib treatment can lead to cancer, lower cellular immunity, increased risk for infections, and overgrowth of demodex (mites). It’s important to keep in mind that atopic dermatitis is a lifelong diagnosis, so there will be a time when the drawbacks of drugs like this one will outweigh the benefits.

Controlling secondary infections of both bacterial (eg. staphylococcus) and fungal (e.g. malassezia) origin are an integral part of managing AD. Antibiotics, such as cephalosporin, can be used to treat staphylococcus skin infections and likewise antifungals for skin yeast infections. Topical antimicrobials may be a better option for pyoderma (skin infection with pus). Again, using these treatments comes with a note of caution where the benefits don’t always outweigh the drawbacks. The use of topical and systemic antimicrobials negatively impact key members of healthy skin and gut microbiomes and can lead to antimicrobial resistance infections.

Understanding what is happening on a micro-level in both healthy pets and those with AD may hold the solutions to innovative treatments for managing atopy cases. Anecdotal evidence and emerging scientific research shine a positive light on the use of microbiota interventions for the future of treating AD cases.

The Role of Skin and Gut Microbiomes in Atopy

While a strong genetic predisposition drives the hair, skin, and immune system’s susceptibility to AD, microbiomes can also contribute to the defective skin barrier representative of AD. There is long standing literature about the human medicine side of atopy and there is a lot we can learn from it.

While there is much to learn about the underlying mechanisms of how the gut and skin communicate, there is plenty of evidence that there is indeed a connection between the two. For example, several studies point to the use of Lactobacillus probiotics in early development stages as an effective prevention of developing atopy. This finding implies that early intestinal microbial colonization may be a critical step for prevention of further development of AD (click here to learn more). Further, several other studies point to an association between dysbiotic gut microbiomes and atopic disorders in humans and animals.

While it is not fully understood, there are many explanations for exactly how the gut microbiome can influence the development and symptoms of AD. One theory relates to immune function, as AD is a disease caused by a defective immune response. The gut plays an important role in immune system function with ~70-80% of immune cells living in the GI tract. A dysbiotic gut can contribute to improper immune function and increased intestinal permeability (a factor associated with food allergies), both of which can manifest as atopic dermatitis (Click here to learn more). Another theory points to dysbiotic guts being prone to inflammation, which can trigger hyper-immune responses in all areas of the body.

Microbiome testing is an informative tool to help guide treatment decisions in pets, as it can detect imbalances of specific groups of bacteria that are related to a cat's or dog's skin issues. Pet microbiome testing can identify pre-symptomatic dysbiosis, which will allow you to more effectively mitigate the severity of symptoms and the progression of the disease.

We learned that atopic dermatitis is associated with dysbiotic (imbalanced) gut microbiomes and that probiotics support is an effective prevention strategy for developing AD. This opens the door to the idea that gut microbiome manipulation could be a possible therapeutic strategy for treating atopy.

A growing body of scientific evidence already points to Fecal Microbiota Transplants (FMT) as a successful tool for treating extra-gastrointestinal diseases, including AD. FMTs are a procedure in which stool from a healthy donor is transplanted into the gut of the patient, thus introducing a complete and balanced community of microbes to the patient’s dysbiotic gut. There are several different routes to administer FMTs, including naso-gastric tube, enema, or oral capsules. Skin microbiota transplants may also be a viable option for treating atopy.

It is important to note that most of the conventional treatments for atopic dermatitis may perpetuate or even exacerbate the dysbiosis associated with AD due to the negative impact on the skin and gut microbiomes. Conversely, promoting balanced microbiomes (such as FMTs) is an effective long-term strategy that has positive impacts on numerous aspects of a pets' health.