Your Cat’s Diet and Chronic Inflammation 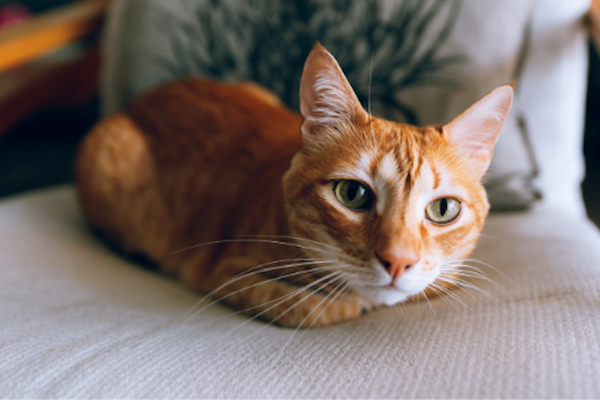 For both humans and our pets, everywhere modern processed foods go, chronic illnesses like obesity, diabetes and inflammatory bowel disease are soon to follow. To aid in your search for the best diet to feed your cat, below we discuss the links between cat food, inflammation and how it impacts your cat's health.

What is inflammation in cats?

Inflammation is a natural process used by your cat’s immune system to combat irritants and foreign organisms like bacteria and viruses. When a harmful invader is detected, the body’s white blood cells release chemicals that increase blood flow to the area and leakage of fluid into the surrounding tissues.

This leads to the physical symptoms of inflammation which include heat, redness and swelling. Although this reaction stimulates tissue repair and protects your cat from infections, it also can be triggered inappropriately. When inflammation persists for a long time and becomes chronic, it can lead to many illnesses including feline cancer and pancreatitis in cats.

Feline inflammatory bowel disease (IBD) is chronic inflammation in your cat's digestive system. When this happens, sections of the digestive tract (typically the intestine) become inflamed, which can be confirmed with a biopsy. System-wide inflammation can also be detected by measuring specific chemicals circulating in the bloodstream. Generally, when scientific studies discuss cat foods and habits that lead to inflammation, they measure the levels of these chemicals in blood or tissue.

Cat foods that lead to inflammation

Cats could have similar reactions to many of these ingredients, although because they are obligate carnivores, they have evolved to eat a diet that is high in protein and fats. Because of this, saturated fats are probably the least likely of these factors to cause negative health effects in our cats.

Refined carbohydrates (which are quickly converted to sugars during digestion) are some of the worst contributors to inflammation in humans. Although there have not been similar studies in cats, carbohydrates have the added problem that they decrease a cat’s ability to absorb nutrients from the food it eats. High-protein cat foods typically have 50% or more of the total calories from a meat protein source, and as few as 1-2% from carbohydrates.

Many veterinarians recommend feeding your cat wet food over dry food, with one of the reasons being that dry kibble also typically contains more carbohydrates than wet foods. And remember, just because a cat food says “grain-free” or “gluten-free” does not mean that it is also low-carb. These foods could still contain potatoes and other carbohydrates that are cheaper than meat.

The polyunsaturated fats, omega-3 and omega-6 fatty acids, have also been studied for their roles in inflammation. Many studies have shown that having a high ratio of omega-3 to omega-6 fatty acids can lead to a reduction in human and rodent inflammation. Based on these studies, a popular guideline is to feed your cat a diet that is higher in omega-3 and lower in omega-6, which is often accomplished with fish or krill oil supplementation.

However, a study that intentionally fed healthy cats a diet low in omega-3 for 3 months did not lead to higher levels of inflammation. Although it is recommended to increase your cat’s intake of omega-3 fatty acids, you may not have to worry about this if your cat is healthy.

Finally, your cat could be allergic or have a food sensitivity to a specific food ingredient like beef, dairy or fish. Many allergic reactions also trigger fur loss, itchiness, skin irritation (atopic dermatitis), so if your cat has these symptoms, you should consult with your veterinarian. Once your veterinarian rules out other potential environmental allergens (like fleas and aerosols), you can try an elimination diet to see if you can identify the source of inflammation.

Feeding habits that lead to inflammation

It’s not just what your cat eats, but it is also the quantity that can trigger inflammation. When too many calories are consumed, cells become stressed and this promotes inflammation. In this way, constant overeating can lead to chronic inflammation.

Although similar studies have not been conducted in cats, we share these energy storage mechanisms with our feline companions. If your cat likes to overeat, it is important to regulate the portion size of their meals instead of leaving them full bowls of food.

Not only do high-calorie diets directly stimulate inflammation, but these feeding patterns can also lead to cat obesity which further increases inflammation. Adipose (fat) tissues in humans and animals are rich in immune cells, and an overwhelming amount of scientific research has shown that a high level of fat tissue results in chronic inflammation.

Obese cats have higher levels of inflammatory chemicals in their bloodstream. However, rapid shifts in fat tissue (during weight gain and weight loss) further increases this inflammation, so if you put your cat on a weight adjustment program, gradual is better than rapid.

Cat gut bacteria: The link between diet and chronic inflammation

In recent years, scientists have discovered that gut bacteria are vital to the development of a healthy immune system. The microbiome helps humans and our cats digest food. Our dietary choices directly influence what types of bacteria inhabit our guts.

Because one of the immune system’s main functions is to fight bacterial invaders, some members of the gut microbiome provoke inflammation in the gut. However, other bacteria (such as Faecalibacterium in humans) have been shown to be anti-inflammatory. Lower proportions of Faecalibacterium have also been associated with inflammatory bowel disease in dogs. AnimalBiome is actively identifying more bacteria like Faecalibacterium that are important for your pet’s overall gut health.

A final piece of evidence that links gut bacteria with inflammation is the high association between antibiotic usage and the development of inflammatory bowel disease (IBD). People with IBD are more likely than the average person to have been prescribed antibiotics in the years before developing IBD. Also, children with IBD were three times more likely than children without IBD to have received antibiotics in their first year of life.

Many members of the AnimalBiome community report that their cat also developed IBD after an antibiotic treatment. If your cat needs to take antibiotics, you should consider tracking their gut health with microbiome testing and taking steps to increase their gut bacteria diversity. Learn how FMT oral capsules can reduce inflammation.

How to lower your cat’s risk for inflammation

In summary, if you want to minimize inflammation, you could try the following:

My Cat was Diagnosed with IBD

How to Support Your Pet During & After Antibiotics

Healing Your Cat With FMT

This article was written by AnimalBiome teammates Adrien Burch, PhD and Zhandra Entrolezo. It was originally published on January 11, 2018, and updated May 17, 2021.  If you liked this article, please consider sharing it.

How to Support Your Pet During & After Antibiotics

by
Katie Dahlhausen, PhD
back to all posts