FIP Has a Cure! Here’s Why It’s Hard to Get 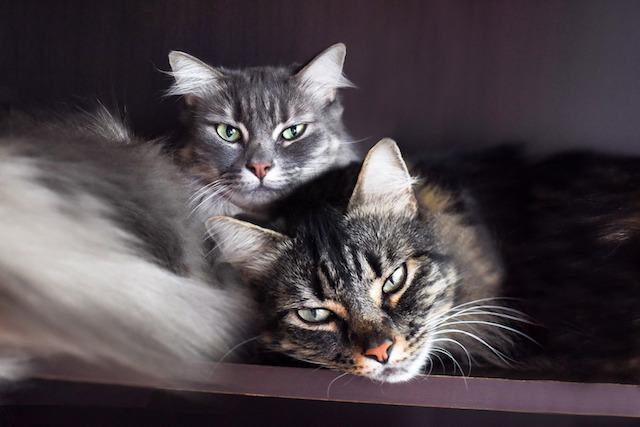 Feline infectious peritonitis (FIP) is a painful, incurable disease that’s nearly always fatal. But over the past 18 months, thousands of cats have reportedly been cured of FIP by a drug that’s very similar to remdesivir—the antiviral currently under investigation as a promising treatment for COVID-19 in humans. As a recent article in the Atlantic explains, the success of remdesivir turns out to be the main reason you probably didn’t even know a FIP cure existed.

Feline coronavirus (a collective term for several viral strains) infects 40%–80% of all cats worldwide. It’s most common in cats under two years of age, typically causes only mild diarrhea or no symptoms at all, and usually goes away as young cats mature and develop immunity. (Feline coronavirus is one of the many pathogens AnimalBiome screens for when selecting healthy donor animals for its fecal transplant supplements. Chief Science Officer Holly Ganz describes feline coronavirus as “highly prevalent” in young cats. Cats whose fecal samples test positive for feline coronavirus are excluded from AnimalBiome’s donor program.)

But in 5% to 10% of cases, a mutation occurs in the virus that causes a much more serious disease—feline infectious peritonitis, or FIP. In these cases, the mutated virus infects the cat’s white blood cells, which carry the infection throughout the body, triggering an intense immune system response. The resulting inflammation can wreak havoc in the intestines, brain, and other organs.

FIP occurs in two forms: “dry” (noneffusive) and “wet” (effusive). The dry form may cause loss of appetite, weight loss, depression, and fever. The wet form causes fluid accumulation in the abdomen or chest cavity, leading to a pot-bellied appearance and sometimes interfering with the cat’s breathing. Either form can also lead to neurologic symptoms, such as seizures or loss of coordination. Both forms are fatal, and the lack of a cure has left pet parents and veterinarians in a heartbreaking position, with no option other than euthanasia.

Niels C. Pedersen, now professor emeritus at the UC Davis School of Veterinary Medicine, has been studying FIP since the 1960s. In 2018 and 2019, he tested a newly developed antiviral drug known as GS-441524 as a potential treatment. The Atlantic recently reported on Pedersen’s groundbreaking results: GS-441524 successfully cured naturally occurring FIP in 25 out of 31 cats in a field trial—“an unheard-of recovery rate.”

While Gilead pursued remdesivir as a possible treatment for Ebola in humans, Pedersen tested the simpler drug, GS-441524, in cats. In collaboration with Gilead’s own researchers, he showed that GS-441524 cured FIP “safely and effectively.”

But as the Atlantic article explains, this long-awaited victory over FIP quickly turned into a dead end.

The most famous coronavirus right now is SARS-CoV-2, which causes COVID-19. This particular coronavirus seems to have originated in bats and was transmitted to humans only recently. (While humans can’t get FIP, there have been a few cases of cats contracting COVID-19 from humans.)

By the start of the COVID-19 pandemic, remdesivir had proven ineffective as a treatment for Ebola. (As the Atlantic article explains, “The virus that causes Ebola is not a coronavirus, but remdesivir is unusually broad-acting for an antiviral, and early results against Ebola were promising.”)

But then remdesivir showed promise against COVID-19 in humans. The drug is still in clinical trials but has already received authorization from the FDA for emergency use in severe cases.

In the meantime, a cure for FIP finally existed, but with Gilead refusing to license it, desperate pet parents and veterinarians around the world had no legal way to obtain it. The demand was especially great in China, where, as Pedersen points out, “FIP is also a significant problem in pet cats.” Chinese manufacturers began producing unlicensed GS-441524, and a black market in the drug grew quickly.

In the U.S., resourceful pet parents found each other and created Facebook groups, such as FIP Warriors, for sharing information about how to acquire and administer black-market GS-441524.

Though he is supportive of pet parents who resort to this route, Pedersen also wants them to be aware of the downsides. The drug “is expensive, stressful for owners and cats, requires proper monitoring, and is not always successful,” he warns. The standard treatment involves daily subcutaneous injections for 12 weeks. And cats with neurological FIP “often require an even higher dosage.”

Nevertheless, since Pedersen first published his results in 2019, more and more pet parents have opted for the black market, with the result that thousands of cats have been cured using GS-441524.

One of those lucky cats is Salem. Adopted as a 10-month-old stray, Salem was diagnosed with FIP about a month later. His adopter, Dana, found out about GS-441524 because her veterinarian had another client who had been able to get the drug from China. Through that client and the FIP Warriors group, Dana acquired the drug and started treating Salem.

“I was lucky to have a supportive vet,” she says. The treatment has to be monitored with repeated blood tests to make sure the dosage is correct. Dana says, “Each time we had to get a blood draw, my vet would have the techs give Salem the injection to give me a break.” The daily injections were difficult. The solution is thick and requires a large needle; the drug is also “pretty acidic,” says Dana, “so it’s a really uncomfortable process for the cat.”

About a month into the treatment, Salem’s symptoms worsened again, and his dosage had to be increased. To make sure he completed enough weeks at the higher dosage, Dana extended his treatment, which ended up taking 105 consecutive days.

As of late May, Salem’s FIP had been in remission for 84 days, “which is the benchmark for considering a cat cured,” says Dana. “My theory is that he got sick so early, he never learned how to be a real cat until we were done with treatment.” But now Salem “jumps on things, watches birds outside, yells at me for food and pets, and loves stalking and attacking people in the house.”

“It was an incredibly exhausting and expensive process,” Dana says, “but I would do it again without question because it brought my cat back to life.”

Since GS-441524 hasn’t been licensed for animal use, veterinarians can’t legally prescribe, acquire, or administer the drug. But according to Pedersen, “It is essential that owners have access to a personal veterinarian that is knowledgeable about FIP, that the cat be confirmed to suffer from FIP and not another disease, and that veterinarians assist with the treatment to assure proper administration of the drug and correct monitoring for a response.”

For more specific guidance, Pedersen directs pet parents and veterinarians to his 2019 paper in the Journal of Feline Medicine and Surgery, “which describes the drug, how it is administered and how treatment should be monitored.” The paper is publicly available and can be downloaded for free.

With a cure for FIP tantalizingly out of legal reach, the black market has played an important and lifesaving role. But even that option might not last. According to Pedersen, “these black-market suppliers have been given a cease and desist order by the patent holder, Gilead Sciences, Inc.,” so there’s no guarantee that this “unapproved source of GS-441524” will continue to exist in the future.

On the other hand, if remdesivir receives FDA approval for broader use in humans, veterinarians should be able to obtain it legally for “extra-label” use in cats. Though Pedersen warns that “the safety and efficacy of remdesivir for FIP has not been established,” it’s nearly identical to GS-441524.

One other antiviral drug has shown some efficacy against FIP—a viral protease inhibitor called GC376, developed at Kansas State University. Studies have found this drug to be less effective than GS-441524, but in 2018, it was licensed to veterinary biotech company Anivive Lifesciences for commercial development. Access to GC376 might at least have given pet parents a legal treatment route, but in March, Anivive announced that it was working with the FDA to repurpose the drug as a candidate for treating COVID-19 in humans.