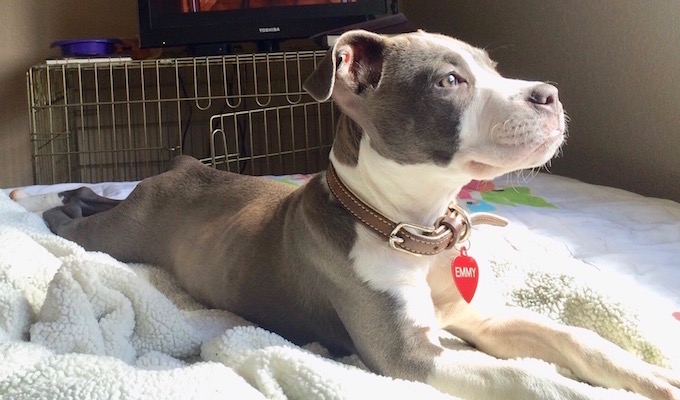 Without a well-established immune system, Emmy the dog suffered from chronic gastrointestinal (GI) issues that developed into a disorder known as, inflammatory bowel disease (IBD). But a close look at her gut microbiome (bacteria in the digestive tract) revealed the key to turning her health around.

Emmy is a pit bull mix who was abandoned with her eight-week-old littermates on the streets of Tucson, Arizona. She was lucky enough to be adopted into a loving family, but her immune system was already compromised, and she was suffering from canine Giardia, a parasite that causes diarrhea, vomiting, and dehydration.

Even after her giardiasis had been treated, she continued to have serious digestive problems. By the age of 18 months, Emmy the dog's diarrhea and vomiting were chronic. She had no strength or energy, and she was dangerously thin and losing weight.

Despite numerous veterinarian visits, medications, and tests, Emmy’s health continued to deteriorate. Finally she was diagnosed with inflammatory bowel disease (IBD), which meant that her intestines were so irritated and inflamed that she couldn’t digest food properly. So Emmy was constantly sick, and every new diet her people tried led to more diarrhea and vomiting.

Emmy’s digestive issues had damaged her body so much that she could barely function. And even her veterinarian didn’t think that she was going to make it.

Early years and the developing microbiome‍

A mother dog’s milk contains an array of beneficial bacteria that she passes along to her puppies. During the first days and weeks of a puppy’s life, those bacteria start building the gut microbiome—a complex community of thousands of different kinds of bacteria that live in the digestive tract and affect nearly every aspect of a dog’s health.

Both humans and animals depend on the bacteria in the gut to digest their food and extract its nutrients, but a diverse, well-balanced gut microbiome benefits your dog in many other ways. In addition to supporting the immune system, these bacteria also help your dog maintain a healthy weight, a lustrous coat, and even a happy mood. (Studies of dogs have found that gut health may play a role in anxiety and aggression.)

A gut microbiome out of balance

Unfortunately, not all dogs have the advantages of a healthy start, and an unstable puppyhood can have lasting health consequences. Without a nursing mother, puppies may be missing important dog-specific beneficial bacteria.

More than 50% of all dogs will suffer from a medical condition related to a microbiome imbalance at some point in their lives. Dogs with digestive symptoms or skin disorders, for example, may be missing some of the beneficial bacteria required for healthy digestive and immune functions.

Besides a rough start in life, other factors that can cause bacterial imbalances in the canine microbiome include diet, illness, and medications. Parasites like Giardia alter the microbiome and their treatment causes additional disruption. Antibiotic and antiparasitic drugs can kill off “good” bacteria in the digestive tract along with the disease-causing “bad” bacteria and parasites that they’re meant to target. (Here are some ways you can support your pet’s health during and after a course of antibiotics.)

When the different kinds of bacteria aren’t present in the right proportions or some key bacteria populations are missing, we describe the microbiome as imbalanced.

Assessing the state of the gut microbiome

When the medications Emmy was given to treat canine inflammatory bowel disease (chronic enteropathy) it still didn’t help the diarrhea and vomiting, her people sent a small sample of her dog poop to AnimalBiome for a dog microbiome Gut Health Test.

Canine microbiome testing can reveal a lot about your dog’s gut health. The assessment report describes all the different kinds of bacteria that are present in your dog’s gut, as well as the proportions of those different bacterial populations. By identifying gut bacterial imbalances early, you can help prevent or alleviate a variety of symptoms and health conditions through changes in your dog’s diet or lifestyle.

Emmy’s microbiome test report showed that she was missing a lot of important dog-specific beneficial gut bacteria: her microbiome had low bacterial diversity. Without all the different kinds of beneficial bacteria that should have been there, Emmy’s microbiome couldn’t function properly, so her digestion faltered, her weight declined, and her mood sank.

Restoring balance in a dog with IBD

To supply the beneficial bacteria Emmy’s microbiome was missing, her people started her on AnimalBiome’s Gut Restore Supplements for dogs. These capsules, which contain carefully screened fecal material (yes, poop!) from healthy donor dogs, provide a convenient way to deliver a dog fecal microbiota transplant (FMT) orally, without any surgery or anesthesia. FMT works by introducing thousands of different kinds of beneficial bacteria from the digestive tract of a healthy dog into the digestive tract of a sick dog. (FMT is used successfully to treat numerous health conditions in both humans and animals.)

Emmy’s people reported that within three days they started noticing improvement in her symptoms. Emmy the dog started having firm poops. She gained weight and had more energy. She started looking and behaving like a healthy dog.

Because inflammatory bowel disease (IBD) in dogs is an autoimmune disorder that continues to influence Emmy’s microbiome, she still receives maintenance supplements to help keep her digestive health stable. But she is now a happy, energetic, healthy dog who enjoys kissing her family and romping with her dog friends. She even participates in obedience and agility competitions.

Understanding and supporting your dog’s microbiome throughout their lives can help prevent or improve a number of health issues:

•   digestive disorders like chronic diarrhea and IBD in dogs

Looking closely at Emmy’s gut microbiome made all the difference in improving her life. And reassessing her gut health periodically helps keep her digestion and immune functions stable and supported, which is especially important for a dog with IBD.

Curious about your own pet’s gut health? Learn more about microbiome testing and AnimalBiome’s Gut Restore Supplements for dogs.